Find us on Mastodon

Happy Birthday to us. 10 years of LAST. 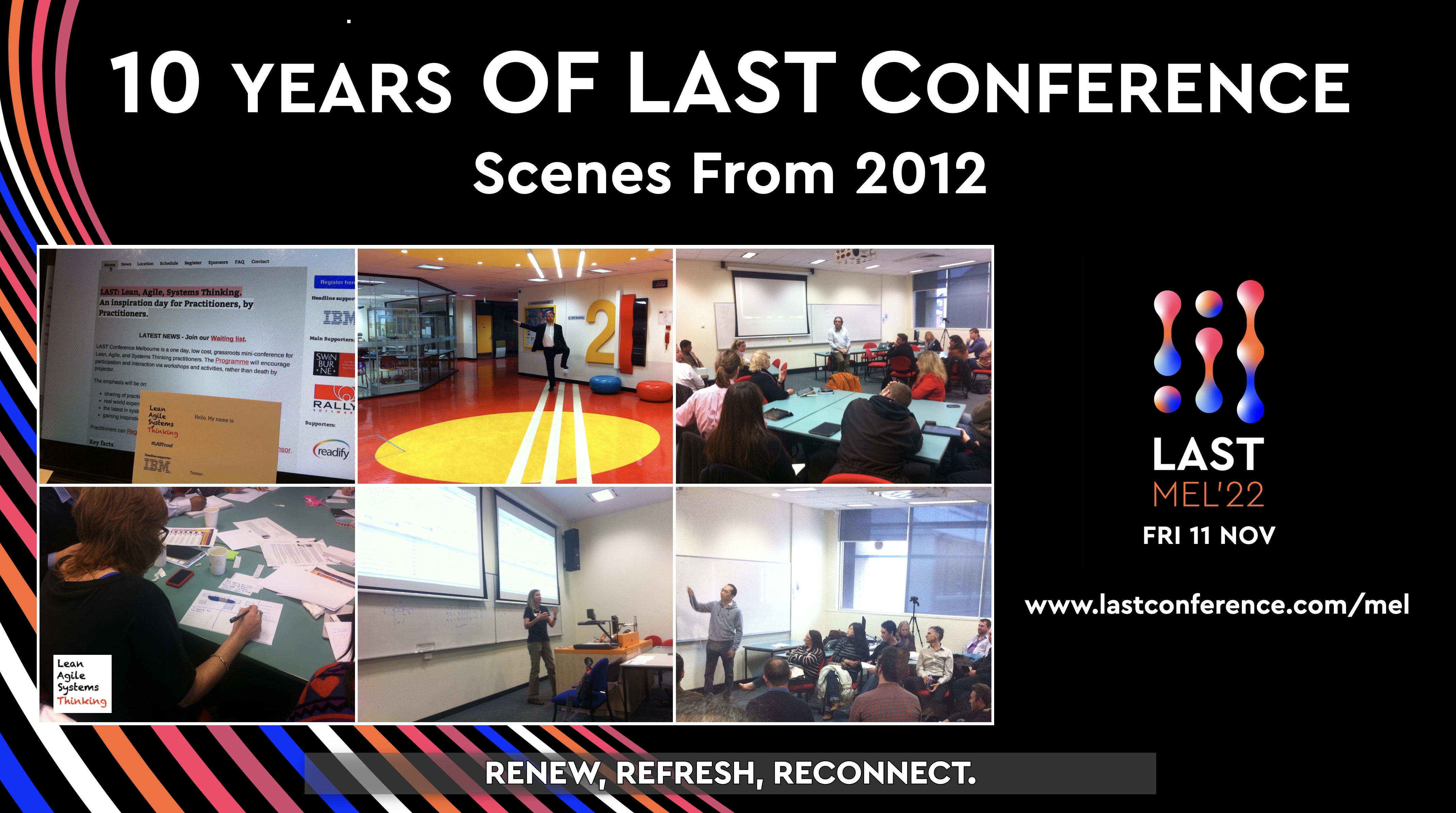 Happy birthday to us!

Ten years ago, today…150 adventurous folks gathered at Swinburne for the first, LAST Conf. The collage above has some of only a few decent photos I could find from 27 July 2012. To see a bunch of photos from LAST Conferences over the years, go look at this Flickr Group and this Google Photos album.

There have been thousands of participants, hundreds of session leaders, dozens of volunteers and helpers, plus numerous companies that have sustained the events. Thanks to all of them, even if we haven't managed to name you all below.

The origins of LAST and some other notes

Prior to the 2012 first edition, one of the co-founders did a writeup about why LAST Conference was started. It took inspiration from the burgeoning meetup community, founded by Martin Kearns, in Melbourne and also the first edition in 2011 of Agile Tour Sydney, organised by Jeremie Benazra. We called it Lean, Agile and Systems Thinking (LAST) because we didn't want to constrain it to just being "agile", and along the way we have had everything from Japanese violin teachers who teach kids to demonstrations on how to thwart facial recognition technology, and everything in between, on the schedule. During this time we grew from the initial 150 people, doubling, then tripling and almost quadrupling in the number of people at subsequent editions and then going to two days in 2016.

In 2016, Andy Kelk came to us and said that he would like to do a version of LAST in Sydney. LAST Syd was born. Over time a number of other community members got involved, such as Caoilte Dunne, Gareth Bowell, Melinda Harrington, Sally Sloley, Jennie Naylor and Bahar Rezvani. New editions were always started organically; local community members put their hands up to organised, along with the help of Ed and Craig (and later Lisa) in Melbourne.

In 2017, Ed wrote a post on LinkedIn, summarizing the first five years of LAST and the organic expansion to Sydney, Brisbane and Canberra that had happened along the way.

Brisbane started in 2017 and quickly became the most enthusiastic LAST city outside of Melbourne. People who helped along the way included, Ryan McKergow, Dave Pryce, Tony Ponton, Andrew Robinson and Jacinta Streat.

That same year, Canberra joined. The instigators were Mia Horrigan and Matthew Hodgson, who were soon joined by the likes of John Connolly, Irene Zhen and Sally Sloley.

Also in 2017, a highlight video was made, that you can see at the top of this post. It was the year that we first had a "keynote", surprising everyone with the famous systems thinker, Dr. Peter Senge (The Fifth Discipline). He joined us on the big screen via Zoom, which at the time was quite the novelty!

We were also fortunate to be introduced to Norman Bodek, the Godfather of Lean, in 2017. His lively address will be remembered by many people. It led to a number of collaborations with him, until his passing  at the end of 2020. They were always remote connections from his home in the USA and Japan.

Five cities around Australia held their versions of LAST in 2019. At the end of 2018, Ed wrote another post, previewing that Adelaide was the next city to get on board in the new year. Adelaide organisers have included Frank Vassallo, Chetan Singh, Jason Cameron, Lumai Tingey, Saman Attarian and Natalie Foti.

In Melbourne, continuing with the theme of experimenting with remote event experiences we had people such as Kriti Sharma (AI expert), Christina Gerakiteys (Singularity U), Mick Liubinksas 9 (Startup expert) and John Cutler (Product Management guru) beam in from London, Greece, Sydney and California. Later in 2019, we had John join us to run a really great all online workshop on Product Management.

With 2020 proving to not be a great year for in-person events, we continued what we learnt with our remote experiments and went all in, creating LAST Anywhere and then the LAST Club. Since March 2020, we have had almost 100 online sessions with people presenting and attending them from all over our region and around the world.

In 2021, while still continuing the program of online sessions, we were able to get back in-person with a couple of small mini-gatherings in 2021, culminating in the 9th edition, albeit cut down, of LAST Conference Melbourne in December 2021.

Also, we revamped our logo from the red, black and white, Chalkduster font, to the lava lamp logo.

We always thought of ourselves as an anti-conference and a bit punk. In fact, we didn't even want to call it a conference at the beginning. Hence we always operated on a "fewer frills" basis, focusing on interactions rather than fripperies or Tchotchkes. That meant for the first few years, we didn't have any "merch" to speak of.

This changed in 2014, when Redbubble decided to become LAST Supporters and got the "Robot" t-shirt design and a number of t-shirts made for us. The "Be Brave Be Smart" design in 2016 was inspired by a famous comic book cover and was done by a friend of a friend in the US. Several, including "Get On Board", "Level Up" and "Find Your Edge" designs were created by Bruce Taylor. You can see everything on our Redbbble page.

We will continue to celebrate our tenth birthday at LAST Conference Melbourne on 11 Nov 2022.

We are also working on a portion of the event that people can participate in remotely. We would like enable some of the thousands of people who have been to LAST Conf, as a Participant or a Session Leader, to be involved in project we are doing to reflect on 10 years of LAST.

We will be doing reflections sessions, between now and the event, as well as on the day.

Right now, we are looking for:

We are also discussing this in the #last-10yr-reflection Slack Channel.You can use this link to join the Slack, if you aren’t part of it already.

Win a t-shirt and hoodie!

Fast forwarding to today, thousands of people have been part of a LAST Conference or online LAST Club event, so we want celebrate by running a giveaway.

All you have to do, is share a memory or photo you have on Twitter or LinkedIn, from any LAST event in MEL, SYD, ADL, CBR, BNE and LAST Club Online. Make sure to tag it with #LASTConf and add a link to https://lastconference.com/mel.

We will pick our favourite in about a week. 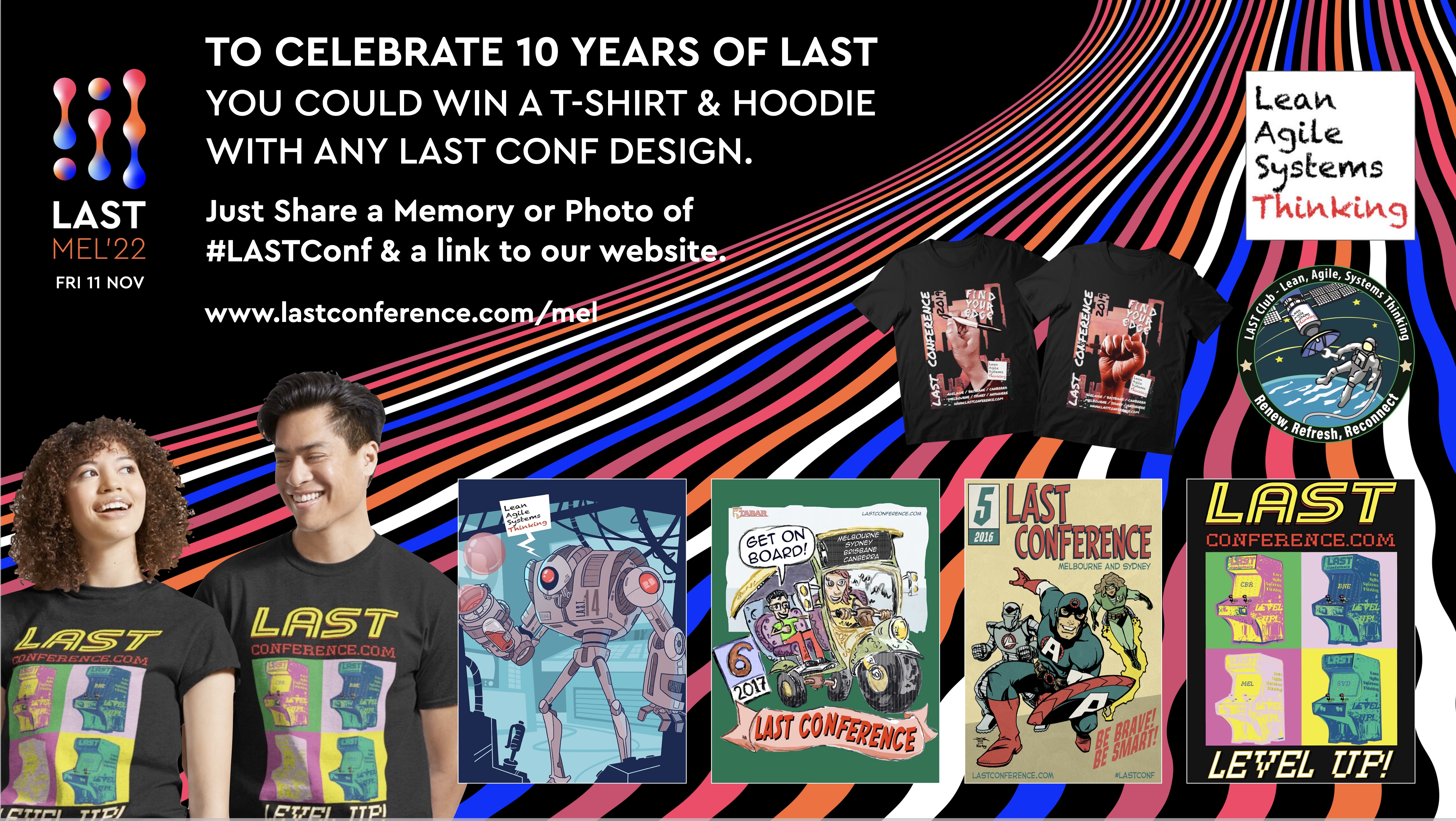 You can join the Club here…