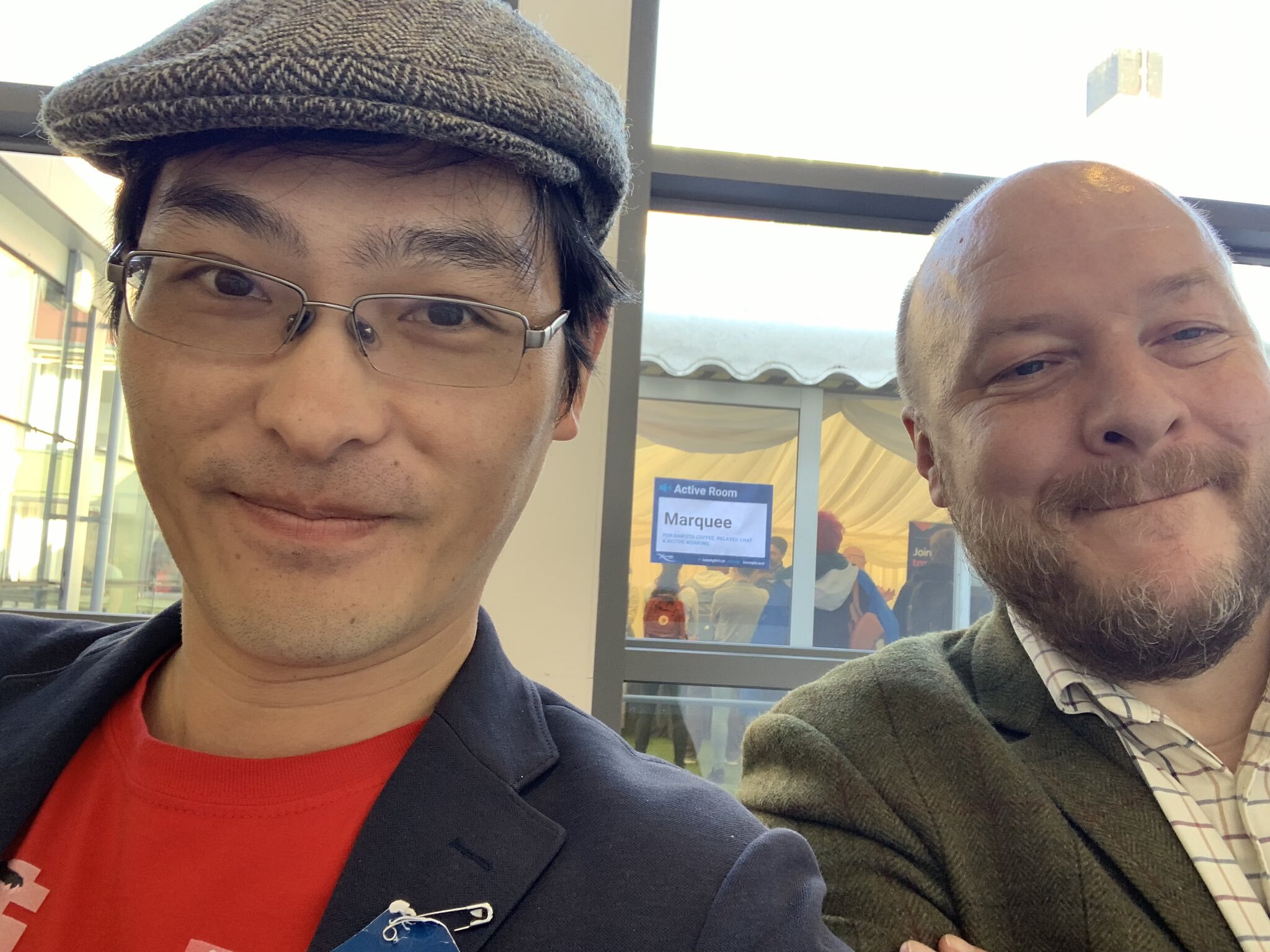 Above: In 2019, Simon and I coincided at the Lean Agile Scotland conference. I re-introduced myself, and got this selfie…

Since the emergence of COVID-19, Simon has had a mega-thread on his Twitter account which covers a lot of different territory. Here is the very start of the thread from 13 March. One of the points he made at the end of April was that people/organisations some want things to snap back to "normal" but a more interesting and "smart" way to approach it is to take the opportunity or opportunities that are presented, even though you might not know exactly what that means. I would add that, depending on what unfolds in the next year, we might not be able to go back to how it was in February 2020.

If you want to see the full thread where Simon covers the steps in mapping this space, you can read it here.

What follows is the completed Wardley Map from 29 April. It pretty much maps out both my thinking about the event about non-formal learning and about how LAST fits into the COVID landscape. Handy.

Now, a lot of the "dafter" money is on simply recreating the past… 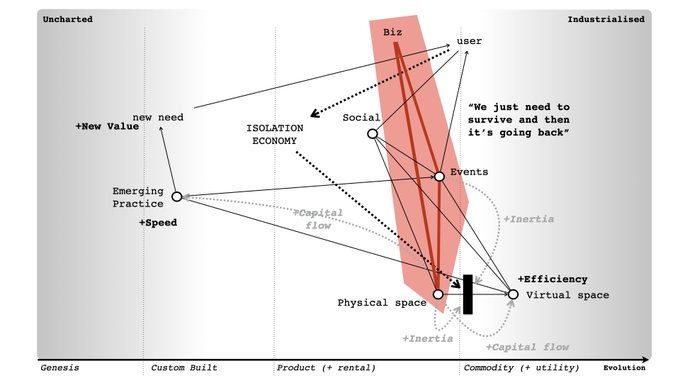 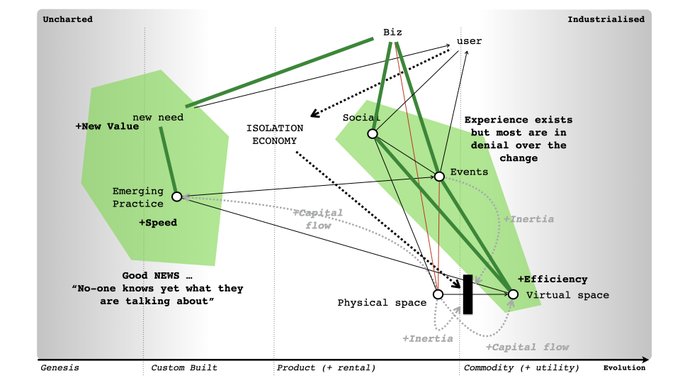 LAST's near to medium-term future is in the green areas of Figure 2, rather than the red area pictured in Figure 1. We also don't want to fall into a trap of trying to exactly mimic a face-to-face, physical event, a skeuomorph of a physical event, if you will. We want to capture emerging practice and Figure 2's  "new value".

What is the LAST Clubhouse?

It's a place to belong

A strength of LAST Conferences since 2012 is:

What's been missing since mid-March is the "Social" aspect of a physical conference. In my opinion, "Social" or whatever acts as a substitute for it currently exists in the "Genesis" zone in Figure 2. That's why we are starting the LAST Clubhouse.

With that in mind, a large element of the LAST Clubhouse is going to be Connectedness. We think that the Club will be structured around a number of Chapters. Each Chapter will be a group of people that you will be able to get to know, which will be good if you're relatively new. More experienced people will be Chapter Leads, who will play a part in helping to organise some of the activities of the Chapter.

There will be Chapter-based activities, as well as those for the wider Club membership.

It's a place to learn

The other main strength of LAST is that it has been a place for people to learn. That ranges all the way from beginners, right up to the seasoned consultant who is searching for that one great thing they can use with their clients in the future.

There will be a series of planned sessions, some of which will be carried across from LAST Conference Anywhere. We plan to also to run some mini-LASTs that have all of the people that we would have at a LAST Conference in Melbourne, Sydney, Canberra, Adelaide and Brisbane, except everyone is online.

We will also start developing new types of sessions, based upon what we have learned so far, and also from the input of members. One idea is a mentoring scheme, another is to run online unconferences, for example.

There will also be opportunities for members to create their own sessions within the Clubhouse. Want to create new value and new ways to solve the new needs that Wardley describes in Figure 2.

Another advantage of being mostly digital is that we will be able to welcome members from a variety of places. I really hope that I get to revive my Kiwi credentials (I come from a family of Cantonese vegetable growing NZ immigrants) and that we have people join the club from New Zealand, and also places like Singapore, rural Australia and other places that don't have a LAST Conference, such as Perth and Tassie.

Hopefully, we will also be able to have more eminent names from outside Australia, run Clubhouse sessions…in a similar manner to the recent Anywhere sessions with people such as John Cutler, Kazuyoshi Hisano and Barry O'Reilly etc. 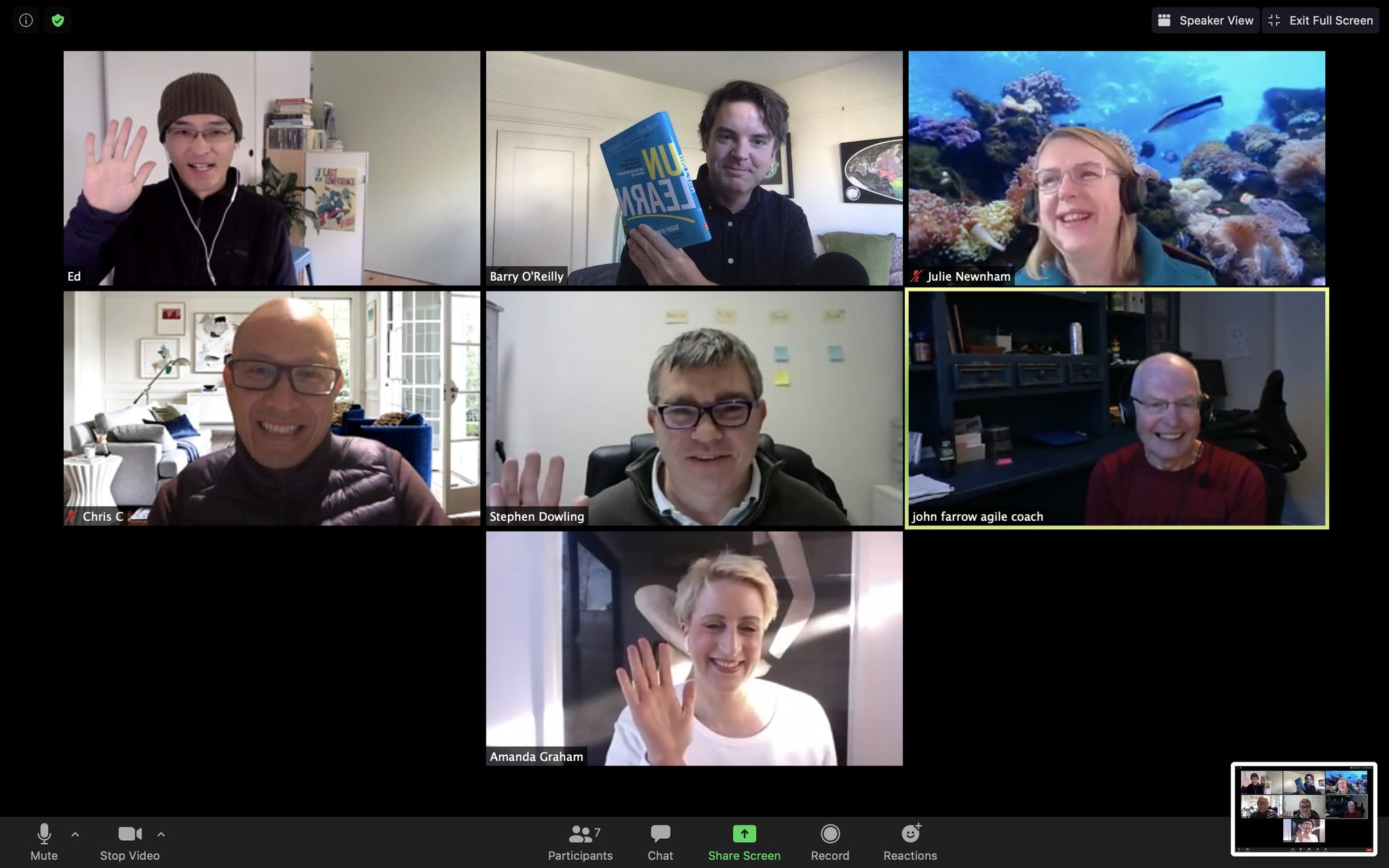 Above: A recent follow-up session with Barry O'Reilly, with a few of the people who were at his Anywhere workshop.

What else is part of the Club…

Everyone who joins the Club in June/July will be a Founding Member. You will receive a LAST Clubhouse "challenge coin". A challenge coin is a coin with insignia that It's inspired by this episode of the 99% Invisible podcast.

Our coin will bear the logo of the club that is currently being developed by Bruce Taylor, the designer of the LAST Conference t-shirts since 2017.

Your Founding Member will be a little bit like this NASA coin.

Just like with the physical LAST Conferences, t-shirts are optional, but we will have them. We don't agree with giving everyone a t-shirt that they may not want. Instead, we won't add in the cost of Club t-shirts but rather give  Founding Members the opportunity to order a special Founder Edition t-shirt.

We also hope that sponsors will come and support the Club and provide benefits to members. More about this, as we go on.

Even though Australia is doing reasonably well in controlling the spread of COVID-19, I still think it's going to be a longer-term journey back to anything approaching the LAST Conferences we are used to. Having said that, if the conditions improve such that we can run a viable and valuable event, Founding Members will have first access to the events and will also receive a special discount. Yes, there is nothing like being able to get together in person to chat, share a coffee or other beverage and slap each other on the back. I hope we are able to do that again soon.

If you're ready to take the plunge already…you could actually click the "Join the Club" button now. The initial period for membership is until the end of September. This 3 month period will allow us to be responsive to what is happening in the world and adjust to what the needs of the members will be…so there will be a bit of building going on around you, especially in the next few weeks.

The membership cost is designed to be comparable to what you would pay to come to a LAST Conference…except it's over a longer period of time.

We'll do our best, and keep you informed

As I wrote back in March for LAST Anywhere, we don't necessarily know all the answers…in some cases, we don't know the questions yet. In some ways, the uncertainty is uncomfortable, but in other ways, it's kind of exciting. Yes, there will be things that we make up as we go along…that's always kind of been the way with LAST, since Craig and I started this in 2012!

In the coming days, we'll be creating emails, FAQs, videos, and more blog posts to explain what's going on with the LAST Clubhouse.

PS - Current LAST Anywhere monthly members, we will be getting in touch with you really soon to let you know what this means for you!

You can join the Club here…